A live blog for Husker Extra 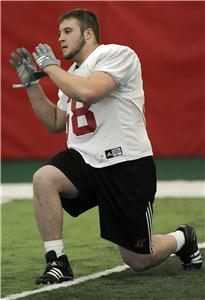 Nebraska's Justin Jackson warms up during the first day of the Huskers' spring football in 2009.
by Matt Schuberton Aug 16, 2012 at 9:12 PM
Sounds easy enough.

A center's job is to snap the ball to the quarterback and find a defender to block.

If it were only that simple.

"When you have (defensive tackle) Baker Steinkuhler lined up three inches from your helmet, and all his job is is to hit you and my job is to call out what the defense is doing, get the ball into Taylor's hands and make a block ... You can be the judge of it," said Nebraska senior Justin Jackson, a walk-on from Roca (Norris High) and one of three centers competing in preseason camp for the starting job.

More about Jackson in a column for Friday.

He's in a battle with junior Cole Pensick, out of Lincoln Northeast, and sophomore Mark Pelini, a walk-on from Cardinal Mooney in Youngstown, Ohio. Mark Pelini is Bo Pelini's nephew.

Each center is getting an equal amount of practice repetitions with the first-string offense, offensive line coach Barney Cotton said. Pensick and Jackson obviously have waited a long time to play a major role for Nebraska. Don't count out Pelini, obviously.

Pensick, who has appeared in nine games as a backup, tries not to think too far ahead.

"You don't want to get caught up too much in it," he said. "You can't let yourself look too far forward because you have to take it day by day and step by step. It's not like I can take a day off."

Not with the 6-foot-6, 290-pound Steinkuhler breathing down your neck.

Powered by Platform for Live Reporting, Events, and Social Engagement

Stars game postponed because of weather

The Lincoln Stars' hockey game against Dubuque scheduled for Tuesday at the Ice Box was postponed and rescheduled for Feb. 18 because of the w…

Get the latest news: Sign up for breaking news alerts

Frigid, dense air swirled across much of the U.S. Monday, forcing some cities and their residents into hibernation while others layered up and…